You are here: Home | Europe | Greece | The 10 Best Castles in Greece

The 10 Best Castles in Greece

With its rich long history and historical significance, Greece is the go-to spot for a perfect warm vacation by the sides of the sea. While there are many islands and museums, visiting the beautiful castles is the perfect way for you to get to know the city. So here are the 10 best castles in Greece that should be on your next trip itinerary.

1. The Venetian Castle of Astypalea Dodecanese 1

The Venetian castle of the Greek island Astypalea royally perched upon the hill on a backdrop of the clear blue sky should be your first stop in Greece. Surrounded by little cubes of white houses, this beautiful castle depicts the history of rulers since the 13th century. The Venetian castle was built by a noble Venetian, Giovanni Querini, in 1413, for protection against pirates and enemies. The palace holds an important memento of all the family emblems on a stone plaque, beautifully preserved over the years. While the fatal earthquake of 1956 has destroyed most of the houses in the castle, it has been renovated to restore most of its beauty, and is a must visit to add to your Greece tour packages .The most important part of planning a trip to Greece is to be able to incorporate your own ideas into your itinerary, and that's where Pick your trail has got your back. They help you design a completely customized Greece itinerary for you with the best prices available. So pack your bags and get ready for your next trip to Greece! 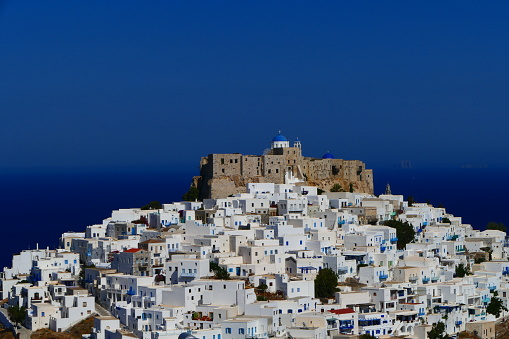 2. The Palace of the Grand Master of the Knights, Rhodes

Rhodes, the largest Dodecanese islands in Greece is home to various stunning medieval architecture among which the Palace of Grand Master of the Knights is eye-catching . This palace, also lovingly called Kastello, is one of the very few Gothic architecture structures in the nation. The Palace of the Knights is arranged around a courtyard with arcades with geometric mosaic flooring. Kastello holds beautiful mosaic arts of the Greek mythology figures such as Thalia, Medusa, and Polyhymnia. Originally built in the 7th century the castle was reoccupied in the 14th century and used as an administrative center by the Knights Hospitaller. The castle overlooks the medieval town of Rhodes, a UNESCO World Heritage site offering a beautiful aerial view of the city. 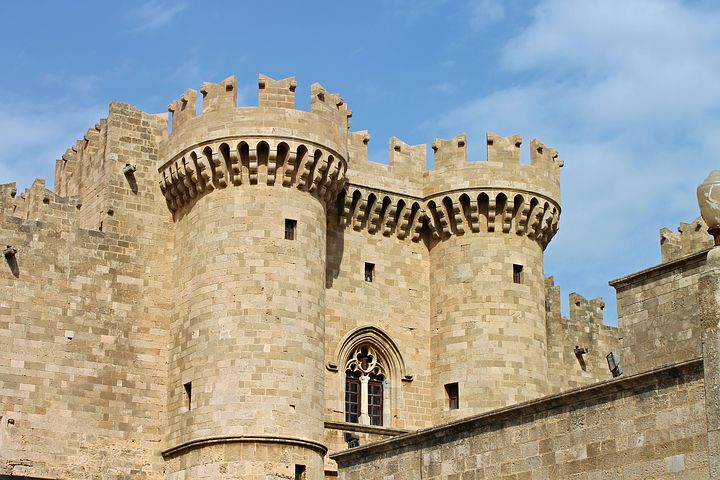 Mystras is an abandoned town to the Southeast of Peloponnese, closer to the town of Sparta. The Mystra castle, a natural fortress located on the steep foothills of Mt. taygetos. Mystras was a strong Byzantine town back in the 13th century, but after the development of Sparta people began to migrate and finally, this town faced abandonment. The L-shaped palace bears a resemblance to both Byzantine and western architecture over its construction periods of the 13th to 15th century. A beautiful place to spend your next vacation amongst the beauty of this stoic castle. 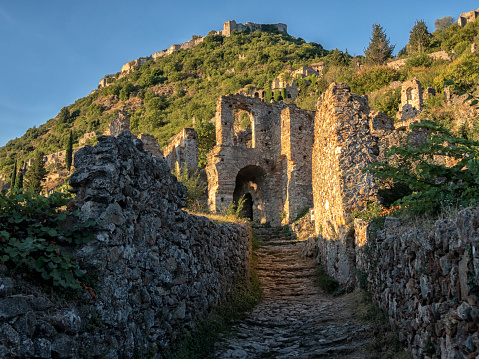 4. The Acropolis of Kavala

Bearing as the landmark of the artisan city of Panagia, the Acropolis castle is perched on top of the peninsula overlooking its harbour. This castle served as a major defense center back in the days and on your visits today you can still see the palace bearing a resort for defence. This Panagian palace, built in the early 15th century on the remains of Byzantine Acropolis of Christoupolis, incorporated the ruins of the older structure. The Panagian palace would be a perfect spot for you to capture the sunset of Greece. 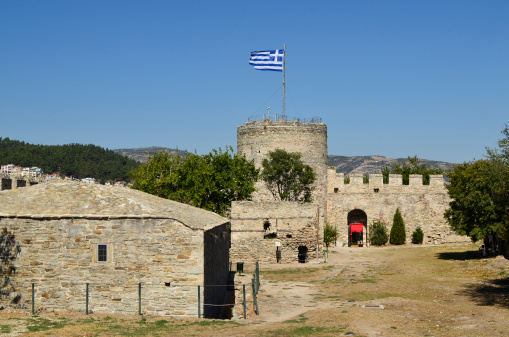 The Methoni castle is located by the sea in the port town, Methoni, Southwestern Greece. This castle is a beautiful design dating back to the Greek Medieval period. In contrast to most of the castles in Greece located on top of hills, this castle is unusually surrounded by the sea on three sides and land on one. This castle holds a dearly imprint of the past that allows us to glance at the life of the ancients. If you're a person that enjoys hiking and the seaside this is one of the best castles in Greece that you might want to add to your travel plan. 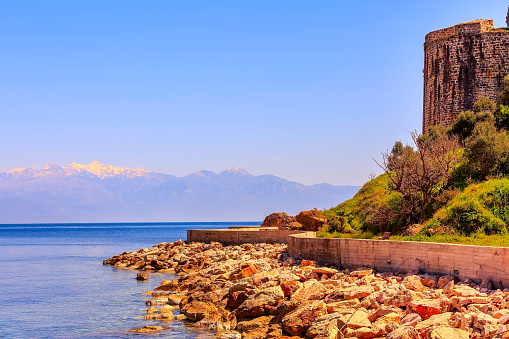 The Bourtzi fortress, derived from the Turkish name Bourtzi meaning tower, is a beautiful water castle located in the small town of Nafplion. Located from a 2-hour drive from Athens, this castle easily bags the title of the most beautiful castles in Greece. The history of this castle depicts that it was constructed by the Turks as a safety depot from their enemies. Furnished with a sea bed barricade which makes it difficult for large ships to access the island, however today it is easily accessible by a boat from the Nafplion port. If you are taking the trip from Athens, don't forget to check out all the other Top Things to do in Athens . 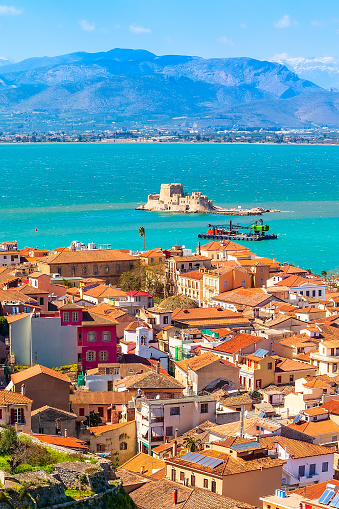 The white tower, located on the waterfront of the city of Thessaloniki is a work of art constructed by the Sultan "Suleiman the Magnificent in the 16th century. This circular tower houses six floors connected by stairs and the terrace offers a beautiful panoramic view of the city.The tower has historically been named as 'The Blood Tower' or 'The red tower', owing to the tortures faced by the victims by the Ottomans.whitewashed to symbolize Cleansing and thus acquired its current name. 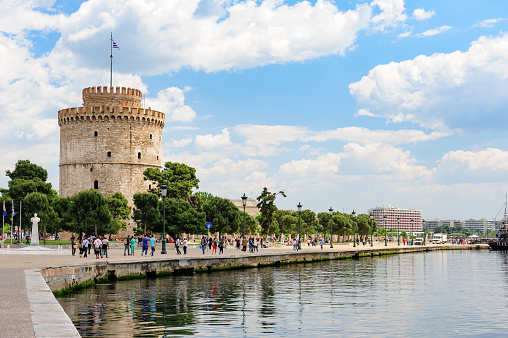 The Old Fortress of Corfu is one of the most impressive fortified architecture in Europe and is a must see during your holiday in Greece. Located on the Eastern side of this artisan town, the old fortress is one of the first buildings to come into view as you enter into the town by ferry. The entrance of the castle, through a Spinada a square which is famously the second largest square in Europe. On the eastern side of the fortress, there is a church of St. George which is the only church in Greece built in Doric style. Just visit this castle on a warm summer day and enjoy a cup of coffee from the local cafeteria. 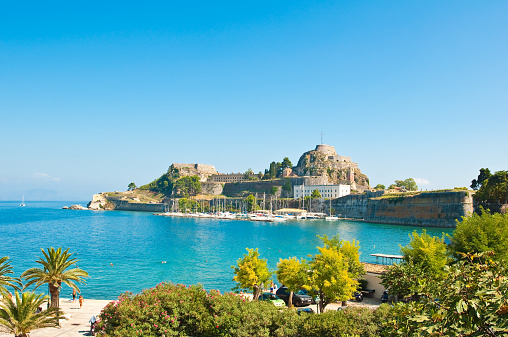 This impressive Venetian castle along the harbor of Heraklion, Crete is a massive two storey castle. Initially built for the storage of grains and military supplies, this castle was constructed with the idea of ​​protection for the port entry point. During the Ottoman rule, this stoic castle was converted as a prison to imprison and kill the revolters in the dark dungeons of the castle. Lovingly named as the 'sea fortress' in history, this castle is a must-visit site in Greece. If you are in Crete, then check out our post on the Top Things to do in Crete . 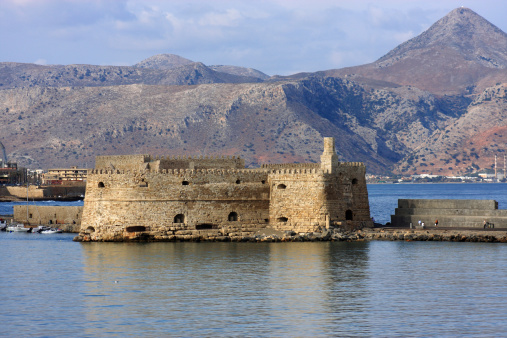 The castle of Molyvos, also called the Mithimna castle, is perched beautifully at the top of a pine-filled hill in the village Molyvos. The castle of Molyvos is one of the biggest castles in the island and has been protected by the locals against the invaders throughout history. Constructed in the mid 13th century, this castle has also undergone several reformations by the Turks, hence exhibiting a mixed architectural style. The best time to visit this castle is during summers, as it hosts musical concerts, theater performances etc for its tourists to enjoy. 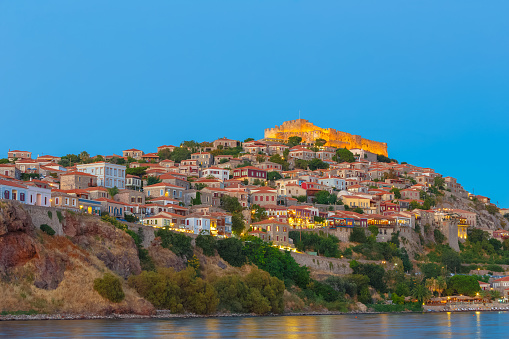 Clearly, Greece has some spectacular castles to see that are definitely worth visiting. If you are looking for other things to do or where to go in Greece, then check out our Greece Travel Guide for more information and tips on the best time to goand the best places to visit. Wishing you a lovely time during your stay in Greece!