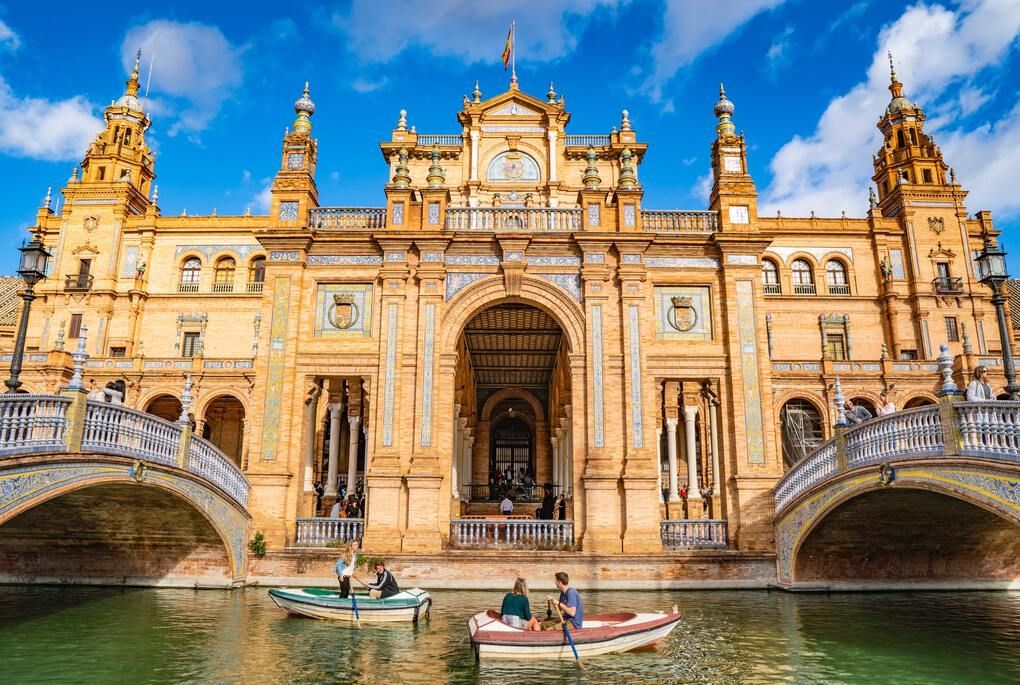 Andalusia is home to flamenco, bullfighting, and tapas. The weather is nice – some of the best in Europe for that matter – and so are the locals, who will welcome you with a smile. Andalusia is stereotypical Spain in the best way possible.

Stretching along the south of Spain, this vibrant region is full of history. After the Phoenicians, Romans, and Visigoths, it was the Moors that occupied these lands for about seven centuries (8th - 15th century) until the Christian Reconquest.

The Moorish heritage is still very visible today and can be admired in some of the most impressive sites in the region such as Granada’s Alhambra and Cordoba’s Great Mosque.

However, Andalusia is quite a large area (it accounts for 17% of Spain!), and planning a trip there can be a bit overwhelming. For that reason, I have selected my top 5 cities in Andalusia for you. 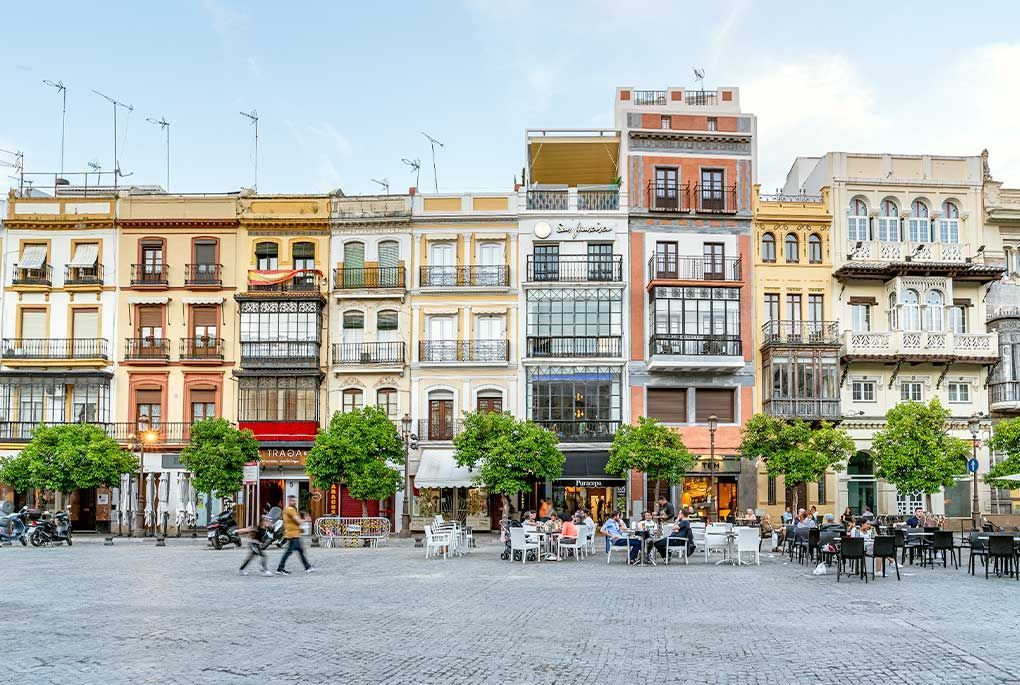 Seville is the largest city in Andalusia. Although lesser known than Madrid and Barcelona, it is a cosmopolitan city that has been able to keep its strong Andalusian roots while offering tons to do and see.

Seville is home to the majestic Real Alcázar (royal palace) which will mesmerize even the most frequent traveller. Built throughout the centuries by many monarchs, it contains a unique mixture of Islamic, Mudéjar, Gothic, and Renaissance architectural styles. This UNESCO World Heritage site even appeared in the 6th season of Game of Thrones.

Another place that you can’t miss while in Seville is its monumental Plaza de España. Its Renaissance and Neo-Moorish influences create a very particular Andalusian look. You might recognize it from movies such as the second episode of Star Wars (Attack of the Clones).

However, there is much more to see in the city. The massive cathedral is the largest in the world and the resting place of Christopher Columbus. There are also a large number of aristocratic palaces with stunning architecture such as Casa de Pilatos and Palacio de las Dueñas. 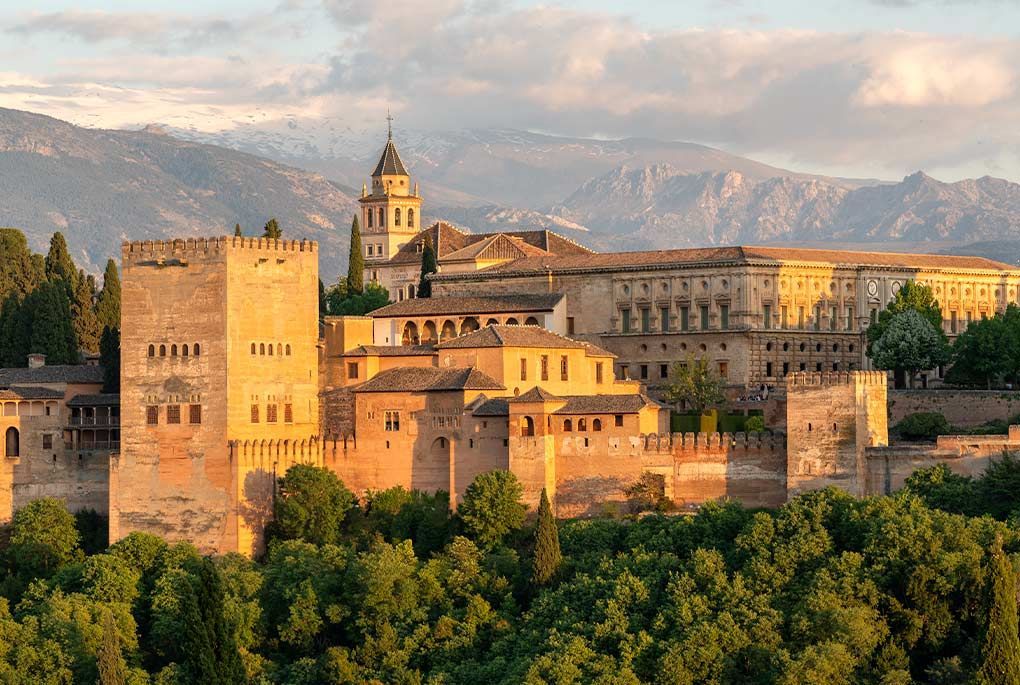 Granada is a charming city that sits below the breathtaking Alhambra Palace at the foot of the snow-covered Sierra Nevada mountains. This royal complex is one of the most visited tourist sites in Spain, receiving almost 3 million visitors every year, and rightfully so – it’s simply astonishing.

Built mainly between the 9th and 14th centuries, the Alhambra invites you to discover the sophisticated Moorish civilization of Al-Andalus. Wander through the Nasrid palaces and get lost in the gorgeous Generalife gardens, surrounded by the smell of roses and orange trees.

After visiting the Alhambra, make sure to explore the narrow cobblestone streets of the Albaicín neighborhood to end up at the San Nicolas lookout. The views of the Alhambra from there are amazing, especially at sunset.

Also, make sure not to leave Granada without experiencing a passionate flamenco show in one of the gypsy caves of the Sacromonte quarter. 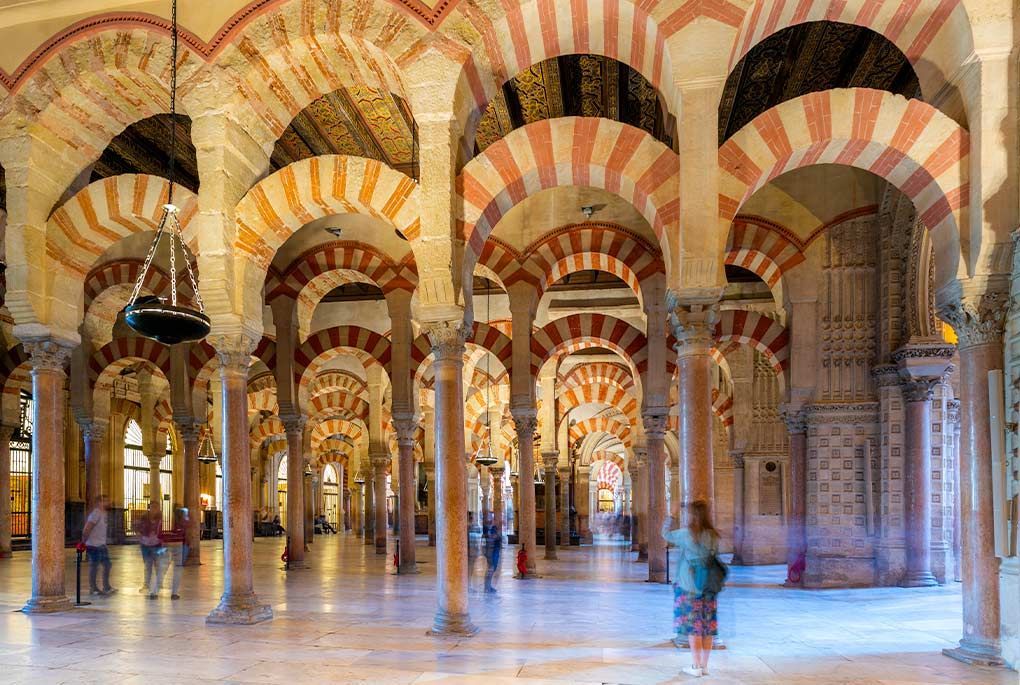 Seville has its Royal Alcazar and Granada its Alhambra, but Cordoba has nothing to envy since it has the Great Mosque. Supported by almost 900 “recycled” Roman columns, this massive mosque was erected during the Moorish rule of the city (785 - 1236). Luckily, the Christians liked it enough not to destroy it. Instead, they decided to build a Catholic cathedral in its center, making this building truly bizarre and one of a kind.

Next to the Mosque extends Cordoba’s old Jewish quarter which is made up of narrow winding streets that will beg you to explore them. Like Seville, Cordoba also has an Alcazar. Although not as impressive, it still deserves a visit. The Viana Palace, Roman Bridge, and Calahorra Tower are a few other sites that are definitely worth checking out. 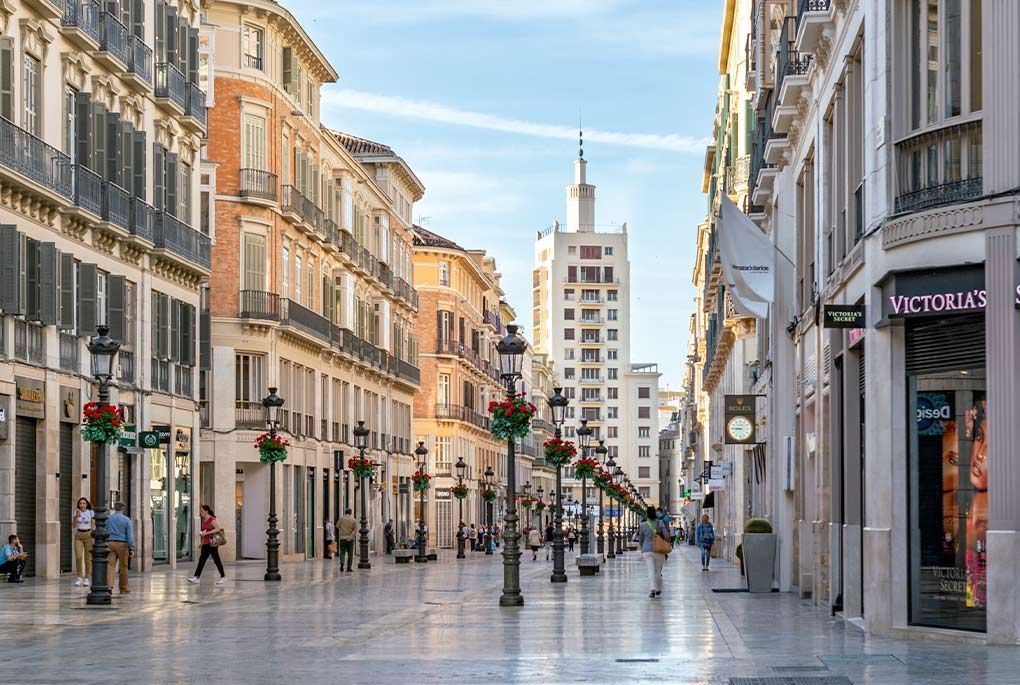 Birthplace of Pablo Picasso and Antonio Banderas, the city of Malaga stretches along the most famous span of Andalusian coast, the Costa del Sol. Although many visitors just use the city’s airport as a gateway to get to the nearby beaches, the city of Malaga is well worth visiting (and a personal favorite of mine).

The city’s chic historic center is beautifully paved with local marble and, after decades of decay, it was tastefully restored in the ’90s. The old town is centered around Malaga’s most famous street, Calle Larios, which is a wide pedestrian promenade, full of shops, bars, and restaurants.

Leftover from the Moorish rule are the Alcazaba (fortress) and Gibralfaro castle. Although both sites are mainly just ruins, they do still make for a great walk and offer beautiful city views.

There is also a Roman amphitheater, a contemporary port area called Muelle Uno, and several art museums, two of them dedicated to Picasso.

And, if you want a beach break, you don’t even need to leave the city since Malaga itself has kilometers of sandy beachfront – La Malagueta beach being the most famous. 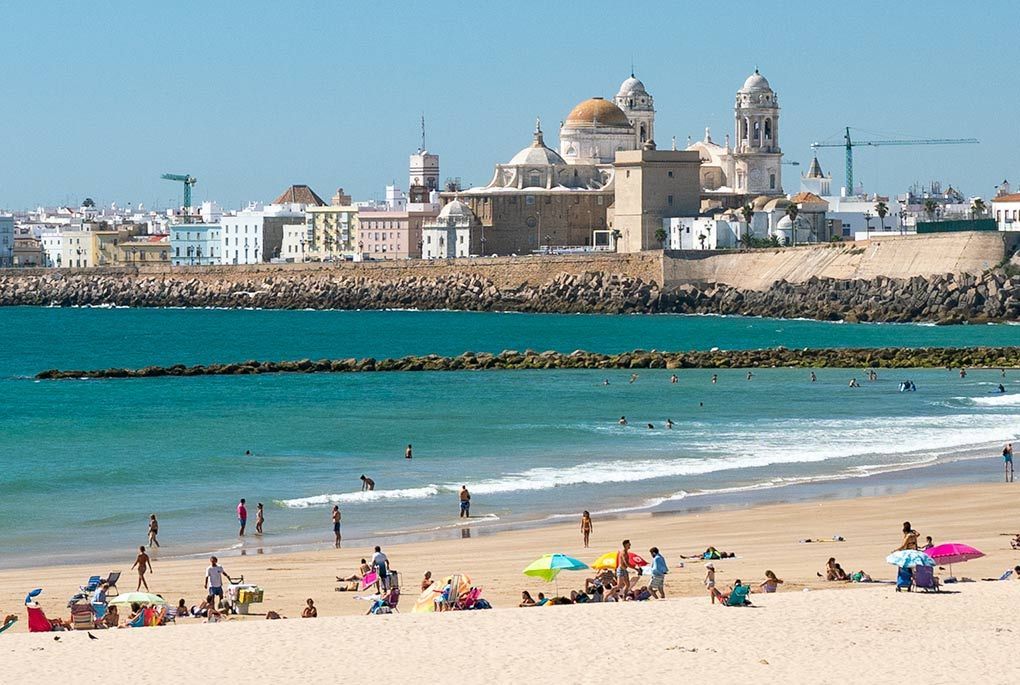 Founded by the Phoenicians in 1100 BC, Cadiz is considered the oldest city of the western world. Due to its unique geographic location – a peninsula surrounded almost entirely by water – Cadiz has always had a very strong connection with the ocean and trade. However, the wealth brought by trade also attracted pirates and invaders. Still to this day, the old city is surrounded by massive defensive walls which can be admired walking along the oceanfront.

Strolling through the old city of Cadiz, you can’t miss its beautiful cathedral with its characteristic golden tiled dome. Another prominent structure in Cadiz’s skyline is the Tavira tower which offers great city views and a very special “city tour” through a camera obscura.

As with Malaga, Cadiz also boasts several great beaches. De La Victoria and Santa Maria del Mar beaches stretch for kilometers along the new part of the city, while the quaint La Caleta beach is right in the old town. This beautiful sandy bay is guarded by two castles, one at each end: the Santa Catalina and San Sebastian castles. This location even appeared in the 2002 James Bond film “Die Another Day”.

Patricia Palacios combines her profession as a web and software developer with her passion for writing and traveling. After having wandered extensively throughout the world, she is currently working on her latest project, España Guide, a travel guide dedicated to promoting her home country of Spain. 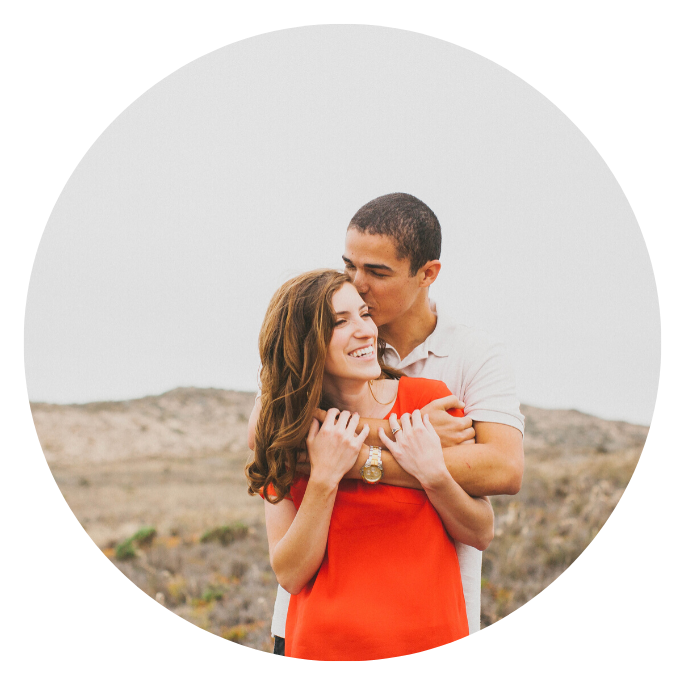